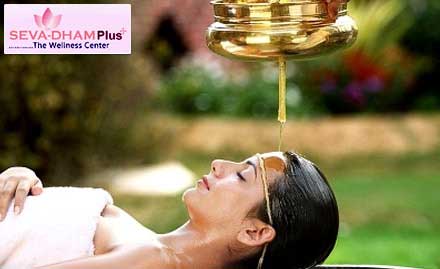 SEVA-DHAM Plus IS SPONSORED BY MANAV MANDIR FOUNDATION. With the blessing of Muni Shri Roopchandra ji Maharaj it began its functioning in September 1994 Under the Charge of Dr. Josh Abraham. Earlier it was known M.S.R. Naturopathy Centre (Muni Shri Roopchandra Naturopathy Centre).
Dr. Josh Abraham successfully ran it till March 2003, before he migrated to U.K. since then Sadhavi Samta Shri took the charge of the Centre. She introduced many modern techniques and technology in the area of Naturopathy and Ayurveda.
Under her guidance SEVA-DHAM Plus has attained many success and heights in the field of naturopathy, Yoga and Ayurveda. Thousands of people have been benefitted and cured during these years.
In February 2012 Dr M.T ARIF joined SEVA-DHAM Plus as the incharge, serves as the chief medical officer; he has Completed his bachelor degree in Ayurveda from BAMC College and Hospital, Bangalore, Karnataka. Specializes in effective management of alignment through MARMA CHIKITSA and Panchakarma therapeutic procedure.
He has also introduced modified Panchakarma and MARMA CHIKITSA based on scientific approach under his guidance SEVA-DHAM Plus has achieved many success in chronic health concerned issues such as Slip Disc, Sciatica, chronic knee replacement condition, sexual disorder, Skin, Asthma, Diabetic neuropathy, Neurological Disorder and other chronic diseases.
With the motto "Trust--Care--Cure", we welcome you to the world of traditional Ayurvedic and Naturopathy treatments. Seva-Dham plus Ayurvedic Naturopathy hospital is situated in a serene and picturesque natural setting with easy access to national and state highways. Availability of modern techniques and the amenities at Seva-Dham plus helps us to keep high standards, to relax and rejuvenate in its natural surroundings. Seva-Dham plus had made achievements in treating thousands suffering from diseases like osteoarthritis, rheumatoid arthritis, osteoporosis, low back ache, cervical spondylosis, lumbar spondylosis, non-healing ulcers, fracture management, anorectal disorders, psoriasis, allergic disorders, respiratory disorders, age related degerative disoders, mental stress, rheumatic disease Slip Disc, Sciatica and lots more.
The panchakarma treatments like vamanam, virechanam, vasthi, nasyam, rakthamoksham, and poorvakarmas like pizhichil, njavarakizhi, sirodara, sirovasthi, udwarthanam, abhyangam, are executed under the strict supervision of doctors.
Now SEVA-DHAM Plus has the capacity to admit Ten Patients as a in-patient at a time. SEVA-DHAM Plus is equipped with all modern facilities and necessary infrastructures including Pharmacy for the patients. We hope to continue our services at a large scale with people support and help.

Description - Mohammed Taslimarif is one of the most renowned Ayurveda in practicing at Seva Dham Plus A Unit Of Manav Mandir Foundation of successful surgeries and his expertise lies in the field of Ayurveda. Mohammed Taslimarif has achieved several recognitions such as Ayurveda

Note: If you are unable to submit this form, please Email or WhatsApp the medical reports to us.

Book Your Appointment With